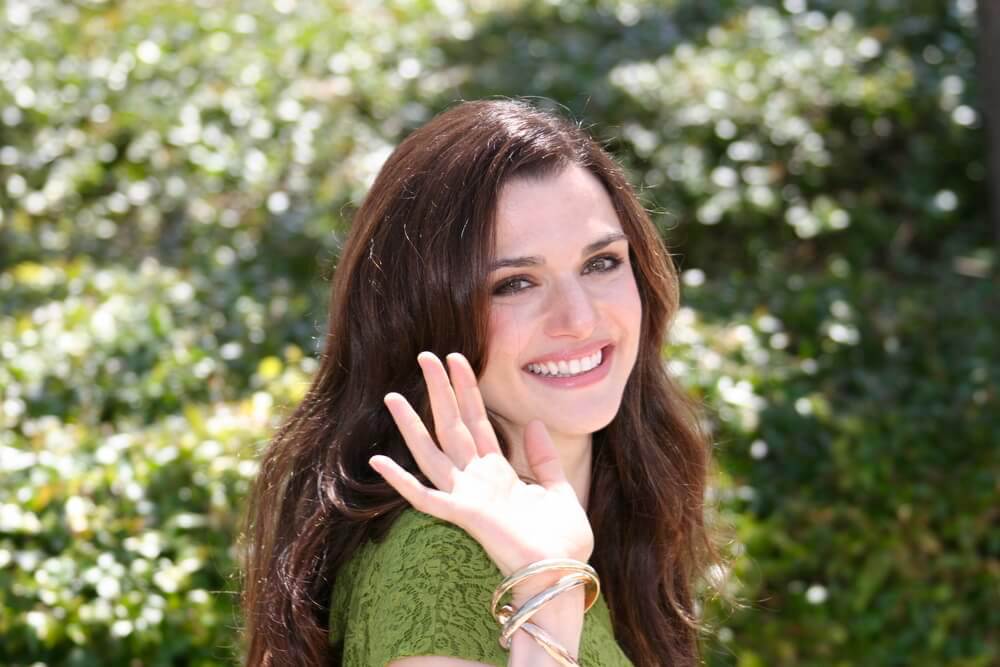 When many of us first saw Rachel Weisz in “The Constant Gardener,” we thought:  Who is this woman whose name we can’t pronounce and where has she been all our lives? That’s Rachel Weisz (pronounced Vice by the way) and as a matter of fact, she’d been around for a while. She first got her big break in 1996 playing opposite Keanu Reeves in Chain Reaction and went on to star in countless action, and Indie films. It was “The Constant Gardener” that put her up there with the Streeps and Hepburns.

Now she’s snagged herself an Oscar, a Bafta, a SAG award, and a Golden Globe, not to mention the chances to show off not one, but three designer dresses while she accepted them. She also snagged actor/ hubby Daniel Craig (not too shabby) and famously accepted her Academy Award pregnant with son Harry in a black Narcisco Rodriguez.  And although we really would love to have been a fly on the wall at her four-person wedding reception, it’s the films that we’re getting down to today. From the “Constant Gardener” to the “Brothers Bloom” and everything before, in-between, and after, let’s have a look at the films of Rachel Weisz without further adieu.

The year is 1933. Rick (Brendan Fraser) and Evelyn (Weisz) are exploring a mortuary in ancient Thebes with their son, Alex. Soon, Alex finds the bracelet of Anubis and action and terror ensue. The family members find themselves on a treacherous mission involving the Scorpion King played by none other than the formidable Dwayne “the Rock” Johnson. If the family doesn’t find the desert of Ahm Share, within seven days, the bracelet will kill Alex when the sun’s rays shine on the Scorpion King’s pyramid.

But not to fear, our girl Evelyn is one tough cookie.  She gets captured by an Egyptian cult, stabbed by some guy with a name much harder to pronounce than Weisz, dies, gets resurrected and risks her life to save her husband. That’s Weisz for you, always prepared to go the distance for her art.

“About a Boy” is the story of 38-year bachelor Will (Hugh Grant).  Will is currently living on his Dad’s royalty checks which, up until now, have afforded him the unique opportunity to spend vast amounts of time dedicated to his life’s main purpose: dating pretty girls. After a short-lived relationship, with single mother Angie, Will is inspired to attend single parents meetings as a way of meeting single moms. The only snag here is that Will doesn’t have a son, so he makes one up. Shamelessly, Will creates infant Ned, who conveniently spends a lot of time with his absentee mother.

Despite Will’s flawed strategy, he does manage to hook up with a single mom named Suzie plus a boy named Marcus, the boy who this film is seemingly about – or is it really Will himself?  Who better but an overgrown child to connect with a regular sized one? Marcus and Will hit it off marvelously and Will becomes an important figure in Will’s life, helping him deal with his mother’s personal issues, and consequently, helping Will deal with his own.

And where does Weisz come in? She’s Will’s just reward. After Marcus’ appearance in Will’s life has helped him mature as much as Will’s appearance in Marcus’ life has, his main purpose in life is realized and he gets to date his pretty girl of choice.

The film begins when Justin Quayle, horticulturist, and diplomat, finds his wife, Tessa has been murdered. But this is no Kevin Costner in the “Big Chill” here. You don’t get an Academy Award for the best-supporting-actress by playing a corpse. A good portion of the scenes are done in flashback, so Weisz gets a lot of screen time.

As the plot thickens, Justin becomes determined to get to the bottom of Tessa’s murder and finds out that Tessa was investigating a suspicious drug trial in Kenya. When she came too close to the truth, she and her colleagues were brutally murdered. As we can see from the flashbacks, Tessa is a girl worth fighting for. Justin embarks on a trip across three continents to expose the scandal. Will this constant gardener ever dig up the truth or will he die trying? Tune in to the “Constant Gardener” to find out!

Before we get into the Brother’s Bloom, let’s just give props to Rachel for method acting. In the two-week period before rehearsal, Rachel had to look like she was capable of all the talents her character of Penelope possessed. These included violin, banjo, guitar, card tricks, break dancing, giraffe unicycling, skateboarding, breakdancing, and a rather challenging card trick to name a few. She learned to rap courtesy of Adrien Brody (some of which was quite cringe-worthy at first, according to Brody himself) and it took her eleven takes to nail the card trick, but, she did manage to film it in one continuous take, no camera tricks or editing necessary. Now onto the film.

The Brothers Bloom is a tale of two born and bred con-men, Bloom Bloom (Brody) and Stephen Bloom (Mark Ruffalo), who set their ill-intentioned sights on Penelope Stamp, a rich quirky heiress who lives in a New Jersey mansion practicing kung fu and breakdancing in her spare time. After a prearranged fender bender with Bloom, a conversation ensues. Soon, she finds herself on a ship to Greece with the brothers. It is there that she is deliberately misinformed that she has unknowingly been recruited to assist in a smuggling operation in Prague. That’s just the way the Bloom Brothers roll. If deceit weaves a tangled web, these brothers are easy prey for spiders. However, charmingly naïve and never one to turn down a chance for adventure, Penelope is thrilled to add smuggling to her list of talents and is eager to participate.

Nonetheless, while the Bloom brothers bumble their way through their scam, Penelope remains pleasingly unaffected. Her unique spirit of adventure manages to protect her from any real harm; she even manages to live out her smuggling dream and get away with them (she convinces the chief of police to let her go). As the delightful eye of the storm, Weisz is the true heart of this comedy/ action/ romance and plays the role with the perfect amount of innocence and corruption.

Things don’t always go as planned. Relationships don’t go as planned, and you certainly don’t plan on your ten-year-old asking you why they didn’t. When divorced father Will (Ryan Reynolds) is asked tough questions about love and romance by his daughter, Maya (Abigail Breslin), he is not sure how to handle it. How can you a ten-year-old a tale that doesn’t have a happy ending, much less one that involves her?

Luckily, Will gets it figured out, and pretty cleverly at that. He decides to tell his daughter a slightly watered-down version of his life and love before her birth. But while the ending is predictable enough (we know Will is going end up with Maya’s mom), neither the audience nor the girl knows which of the three women his younger self meets will turn out to be Maya’s mom.  Weisz plays Summer, the dark-haired intriguing (and cleverly renamed) intellectual of the blond, redhead and brunette trio. Do gentlemen prefer brunettes? Definitely, maybe.

Bourne may have gone, but his legacy lives on.  Yes, this is the installment of the Bourne franchise in which Matt Damon left and, consequently, took his character with him. Jason Bourne does not actually appear in this movie, but Rachel Weisz does, and so does Jeremy Renner as Aaron Cross, Operation Outcome black ops agent, assigned to Alaska for a brutal training exercise.

After surviving extreme weather and traversing rugged terrain, Cross finds out he has aced the training and is rewarded with little pills known as chems, which purportedly enhance the physical and chemical abilities of the users.  When biochemist Dr. Marta Shearing (Weisz) informs him he has been genetically modified to retain the physical benefits of the pill permanently, they break into the pharmaceutical company where the chems are manufactured   to find Cross an unlimited supply.  Action ensues, plot twists, occur, but most critics agree, Renner and Weisz had some really good chemistry.

Who said Jewish girls had to be nice? Certainly not Rachel MacAdams or Rachel Weisz when they took their roles as (un) Orthodox Jewish lovers in the 2017 film “Disobedience.” This tale of friends with benefits brings up questions about faith, love, passion, and conformity.

Set in North London, Disobedience tells the story of a Ronit Krupka who is summoned back to her Orthodox Jewish community for her estranged father’s funeral after spending years in New York, having been ostracized by her community for her attraction to her childhood friend, Esti.

When friends reunite, flames reignite, and soon Ronit and Esti find themselves in love affair once again. Only this time they are no longer children and life is more complicated.  Their tryst has an impact on Esti’s marriage and her standing in the community and it’s a question of what love means and which kind of love is the most meaningful.

In the original Wizard of Oz, the only time we see the Wicked Witch of the West is after she’s been crushed by a house. Luckily, in this prequel, she is still very much alive and kicking, and not just her ruby-slippered feet.

In this reimagined version of the Wizard of Oz, Rachel plays Evanora, also known as the Wicked Witch of the East and protector of the City of Oz. Her hideous form is hidden by wearing a necklace that gives her the appearance of, well Rachel Weisz. There’s also a Glinda the Good Witch, played by Mila Kunis, and Evanora’s big sis Theodora, resident WW of the West played by Michelle Williams.

It all begins when Oscar (James Franco) lands in Oz after his hot air balloon hits a tornado. Emphasis on the “hot air” here. In reality, Oscar is a con artist from a traveling circus in the Midwest. In Oz, he is believed to be a wizard destined to bring peace to the land. When Oscar hits the town, the witches begin misbehaving accordingly. Will Oscar be able to put his dubious ethics aside and truly live up to the name of Oz the Great and Powerful, or is it all just a smoke and an image projector? Find out in the sequel!

Meow in the in the 1700’s!  The Favourite is a steamy love triangle with a lot of action going on in the bedchamber. The black comedy starts when Queen Anne of Great Britain falls ill and loses interest in her monarchial duties.  As a result, Sarah (Weisz) Anne’s adviser and secret lover, takes over the reins (and the reign) effectively ruling the country through the Queen, while the queen is free to race ducks and play with her 17 rabbits (one for each child lost).

The major threat to Sarah’s power comes in the form of Abigail Hill (Emma Stone), Sarah’s poverty-stricken younger cousin. Abigail’s standing is further tainted by her father, who gambled her away in a game of whist. She wins the queen’s favor when the tonics and herbs she applies to the Queen’s gout-stricken legs turn out to work  As Abigail and Anne’s doctor visits become a little less professional, and a lot more personal, (read that as sexual)  it’s clear Sarah needs to reassert her primacy in more ways than one. What follows is a good old fashioned catfight, emphasize on old fashioned, over who will be chosen as the queen’s favorite. We’ve already chosen ours.