The 2018 MTV Video Music Awards were held earlier this year, and, as with any red carpet event, many of the outfits seen that night were truly inspiring.

From Jennifer Lopez to Kylie Jenner, here are 12 of the best celebrity fashion looks seen at this year’s VMAs.

Jennifer Lopez topped many of the best-dressed lists for the night of the VMAs, and for good reason too!

The singer stunned in a mercury chain mail Versace gown, with an off-shoulder silhouette along with a thigh-high slit.

As with many of the outfits that Jlo tends to favor, this one was sleek, sexy and sparkly, perfectly emulating the singer’s own personality.

Lopez has long since been close friends with Donatella Versace, making it no surprise that this wasn’t the only Versace item to appear on the singer during the night…

Jlo was booked to perform at the event and, for her performance, she donned another Versace number. This time, it was a dramatic billowing cape featuring the brand’s signature print.

Wondering what she wore to the after-party?

Lopez didn’t disappoint, once again showing up in Versace. This outfit featured a belted catsuit that had been made with the same print used in the cape that the singer wore during her performance.

Loved the jewelry that Lopez was seen in that night?

It was all provided by Tiffany & Co. Lopez was able to have her pick from their collections, and ended up wearing almost $2 million worth of diamonds, making it no surprise that she was truly sparkling at the event. 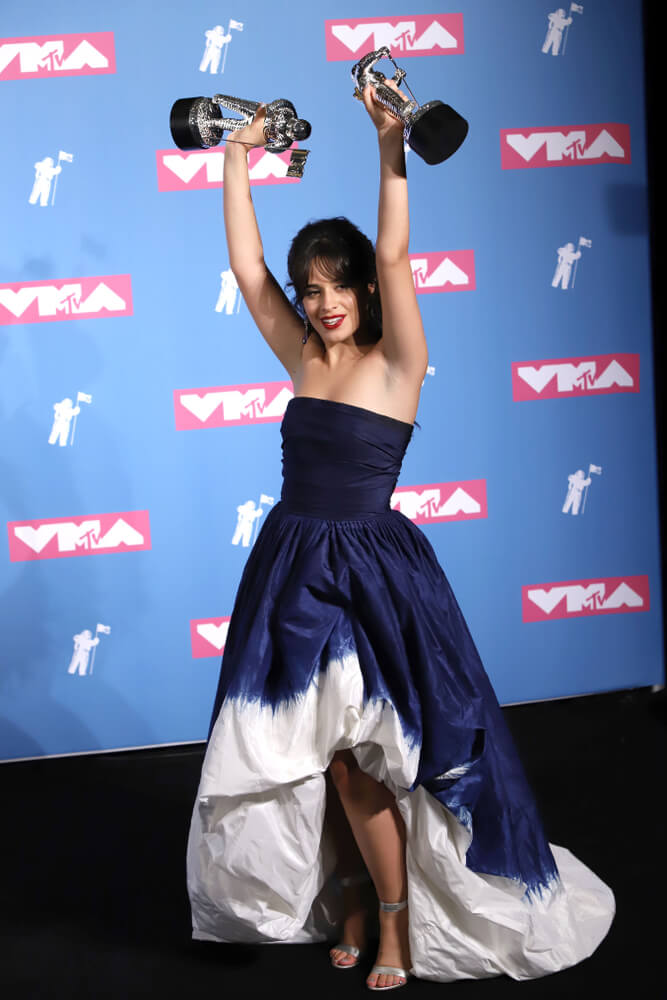 Camila Cabello’s fairytale-inspired look for the 2018 VMAs was a truly exceptional one, and was an outfit that Cabello herself clearly really enjoyed wearing.

Fashion should be fun, and while this is something that many people tend to forget, Cabello was all for having fun with her dress on the red carpet.

Her navy and white strapless gown was designed by Oscar de la Renta, and featured a swirling, voluminous bubble skirt. This was something that Cabello obviously loved, as she spent some time twirling her skirt around on the red carpet for the photographers, ensuring some princess-worthy snaps.

The 21 year old star also wore a set of glamorous earrings, featuring everything from aquamarines and rubies to amethysts and pink sapphires, along with a stack of sapphire rings. All of this colorful sparkle really helped to accentuate the beautiful gown. 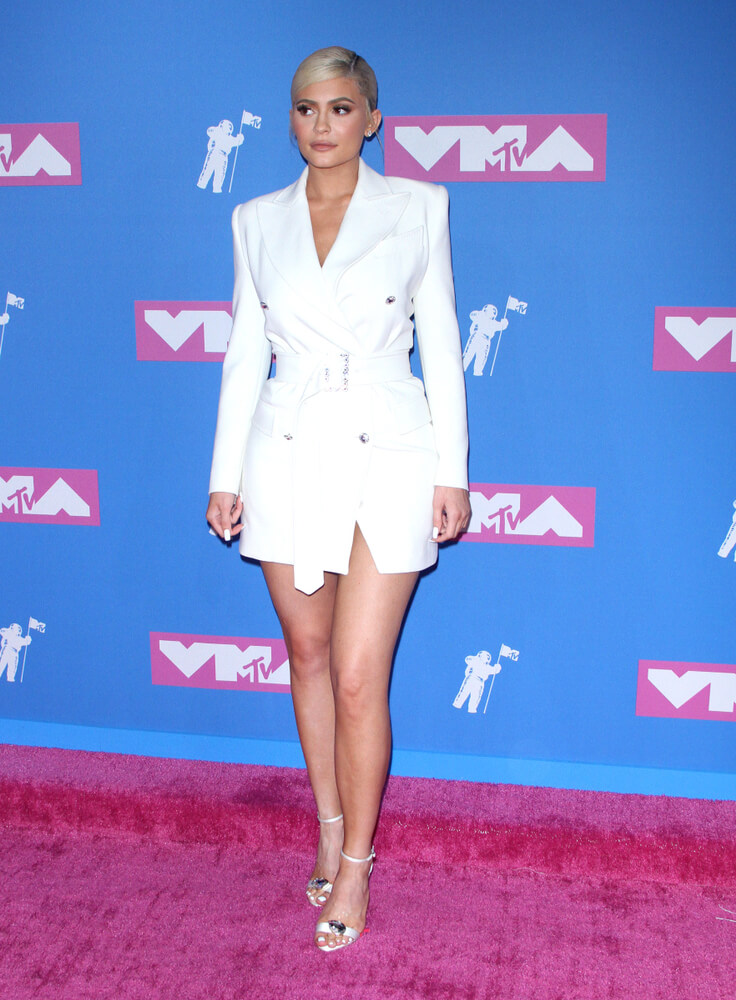 Kylie Jenner has become quite the fashion icon lately, and her outfit for the 2018 VMAs definitely did not disappoint.

Although Jenner was wearing a sequinned jersey dress on her way to the awards, she had an outfit change before stepping on to the red carpet.

What did she end up wearing?

A sophisticated but sexy tailored mini tuxedo dress by Tom Ford. The dress was all-white, which has been a trend in itself this year.

Of course, being Kylie Jenner, some sparkle and shine was still needed…

Jenner did this through her accessories, opting for:

Jenner’s hair was also pulled back and sleek, complementing the minimalist feel to her outfit. 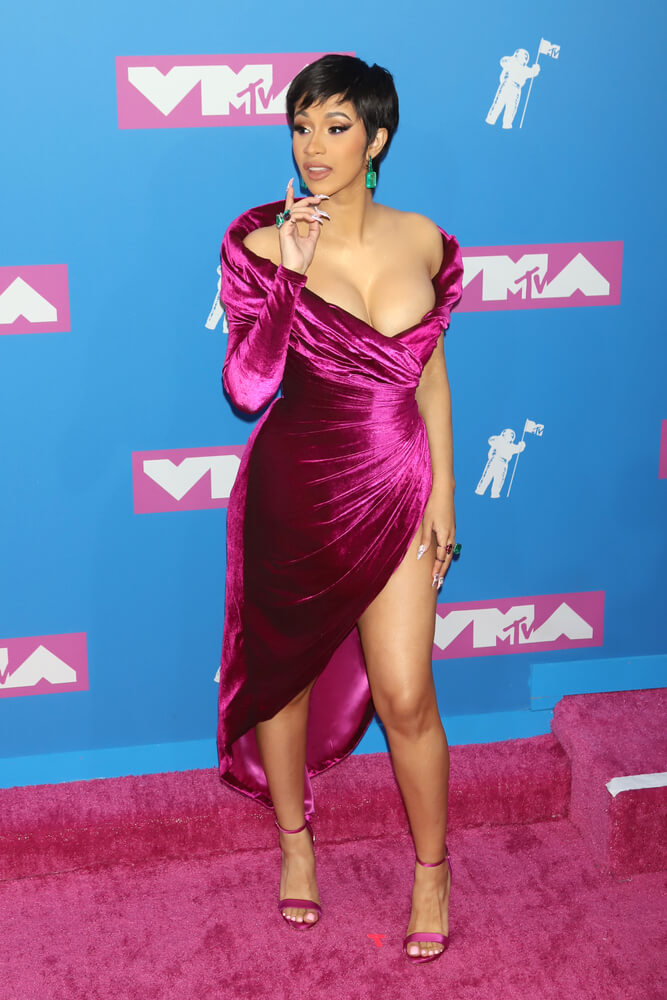 Cardi B fans were waiting in anticipation for the star’s arrival at the 2018 VMAs, because she hadn’t yet made a public appearance after giving birth to her daughter.

Cardi rose to the occasion, showing up in a spectacular velvet dress in a plum/fuchsia shade. The dress was figure-hugging, almost looking as though it had been inspired by Marilyn Monroe with its plunging neckline and thigh-high slit.

Who made the dress?

It was by Nicolas Jebran, a Lebanese designer who is known for its outstanding haute couture.

However, it wasn’t just the dress that drew eyes to Cardi that night…

Cardi’s nails featured some incredible nail art, which had been created by Jenny Bui, a nail artist who also blinged out Cardi’s nails for her Ring music video.

Her hair also helped to pull her outfit together…

The short style that Cardi wore meant that her shoulders were fully visible, enhancing the dress’ cleavage-revealing neckline.

Karlie Kloss did this too, opting for a shimmering metallic dress created by Elie Saab, complete with the thigh-high slit that seemed to be all the rage that night.

Wondering how she accessorized the dress?

Love the dress that Kloss wore?

You can find it in the Elie Saab 2019 Resort Collection. 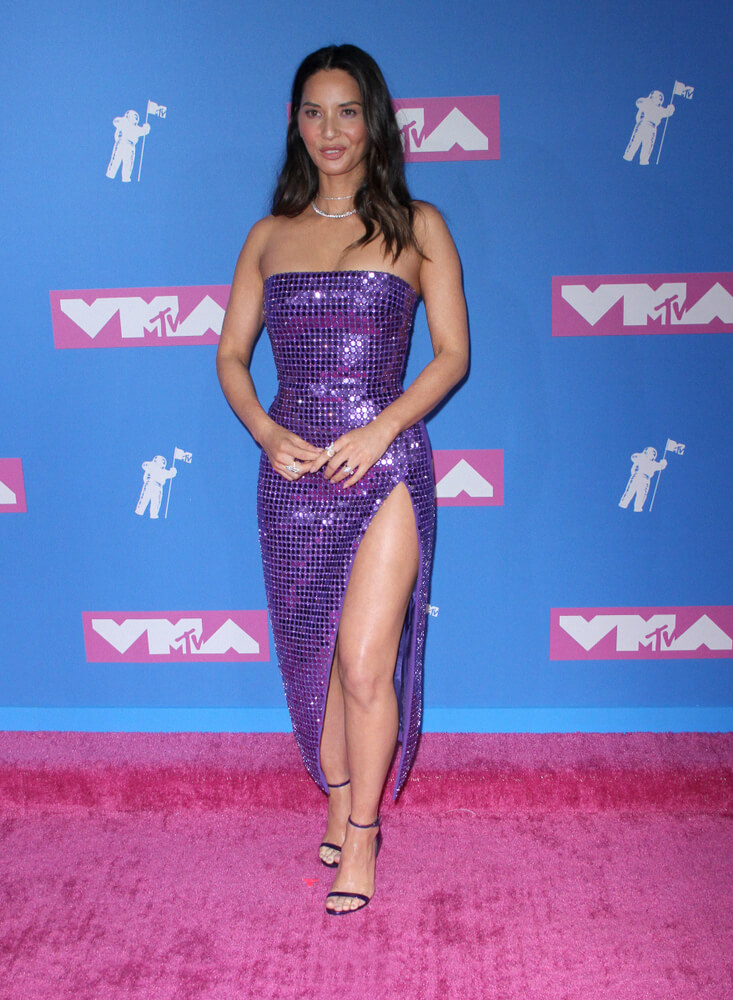 Not had enough of the thigh-high slits yet?

Good, because here’s another one…

This time, it’s on Olivia Munn, an American actress and model.

The sparkling strapless purple dress was designed by David Koma, and you can find it in the designer’s Fall 2018 collection. The dress accentuated the actress’ curves beautifully, with the slit showing the perfect amount of skin.

What did Munn wear this dress with?

She kept her shoes quite simple, opting for a black pair of heels from Loriblu, while her clutch was from Tyler Ellis. Munn went all out with her jewelry however, going for plenty of sparkle in her rings and necklaces, although this wasn’t necessarily needed due to her dress already featuring so much sparkle.

Nevertheless, Munn looked fantastic on the night, and this is a dress that will likely be flying off store shelves after the actress managed to pull it off so well on the red carpet. 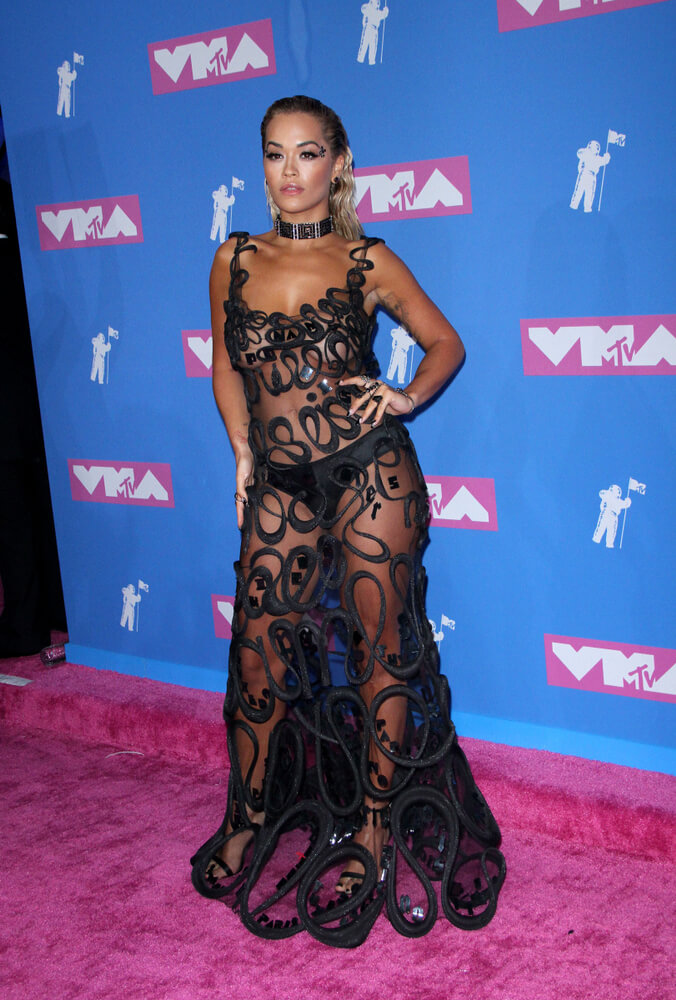 Rita Ora’s VMA dress left very little to the imagination, but Ora is very well used to providing a shock factor on the red carpet by now, thriving when she has all eyes on her.

That was definitely the case when Ora stepped out in her barely-there Jean Paul Gaultier gown.

The dress was embroidered with Baroque details, which added a small amount of coverage. This was a dress that was full of attitude, suiting Ora’s character perfectly.

She paired this dress with custom jewelry from Lorraine Schwartz, wearing over 200 carats of black diamonds in her choker, headpiece and rings, all of which gave her dress some sparkle.

Opinions were split when it came to Sabrina Carpenter’s dress at the 2018 VMAs.

The American actress and singer chose to wear a white Versace gown with a thigh-high slit and a single sleeve, along with details that some fans said made the dress look like a giant bandage.

On the other hand, many others loved the dress, appreciating how it was simple but still featured subtle design details that gave the dress extra texture, while also enhancing its figure-hugging silhouette.

Whether you loved it or hated it, there is no denying that Carpenter definitely managed to make a statement on the red carpet, with her dress being one of the most talked-about on the night. 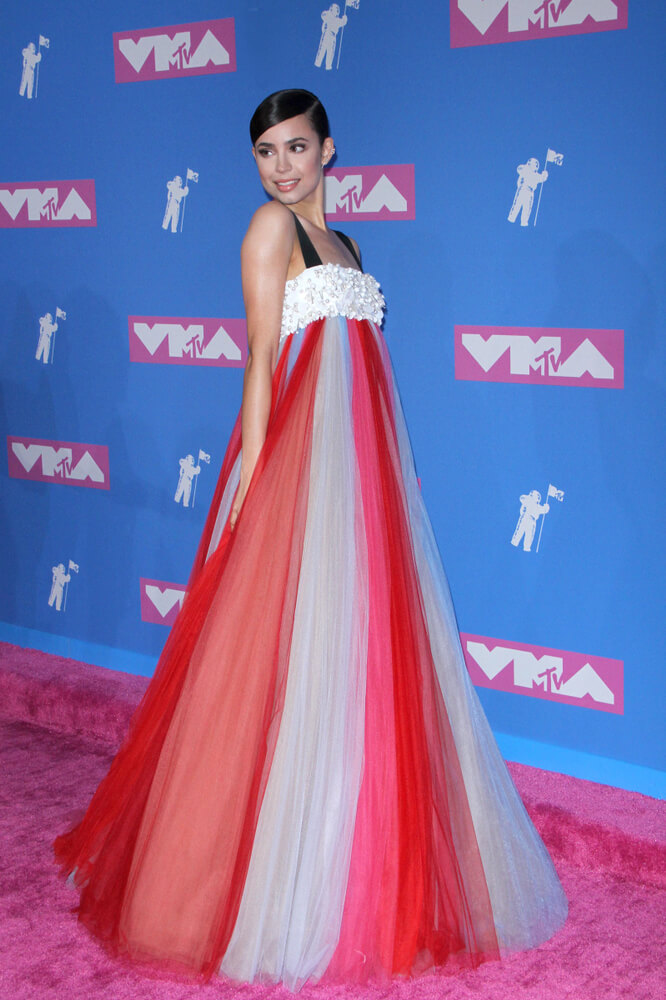 Disney star Sofia Carson looked like a true princess on the VMA red carpet, thanks to her floor-length Carolina Herrera dress.

While the white bodice of the dress featured pearl detailing, it was the skirt that took center-stage. The whimsical layers of colorful tulle gave the dress a fun, girly appeal, while the wide black straps at the shoulders helped to keep this dress grounded.

Carson ensured that her look stayed modern with the way in which she styled her hair, opting for a sleek and fresh ponytail instead of something more elaborate.

Want the dress that Carson wore?

You can find it in the Carolina Herrera Fall 2018 collection, but you’d better be quick as Carson’s red carpet appearance has pushed this dress to the heights of popularity.

Blake Lively has earned herself the reputation of being quite the style icon in recent years, but the outfit that she wore to the 2018 VMAs resulted in contrasting opinions.

The actress has been known for her love of suits, having been spotted in seven different suits in the week leading up to the VMAs, and this is exactly what she wore to the event.

However, this suit was quite different from the traditional power suits that you would normally see out there…

The all-white suit, which was designed by Ralph & Russo, featured oversized, wide-legged culottes with pleated sides. If that wasn’t attention-grabbing enough, the suit’s fitted blazer consisted of sparkly lapels, giving the outfit even more glamour and texture. The crisp white shirt that Lively wore underneath her blazer helped to give the outfit more of a down-to-earth vibe.

Lively decided to keep her hairstyle quite simple on the night, going with a deep side part and a low ponytail, preventing the outfit from looking too fussy.

So, what did fans think of this look?

Some slammed it, claiming that it appeared too stuffy and mature. However, others absolutely adored it, loving the way in which Lively managed to pull off such a bold and empowering suit. The fact that she wasn’t showing that much skin was also frequently commented on, especially since many of the other celebs at the event were wearing barely-there dresses. 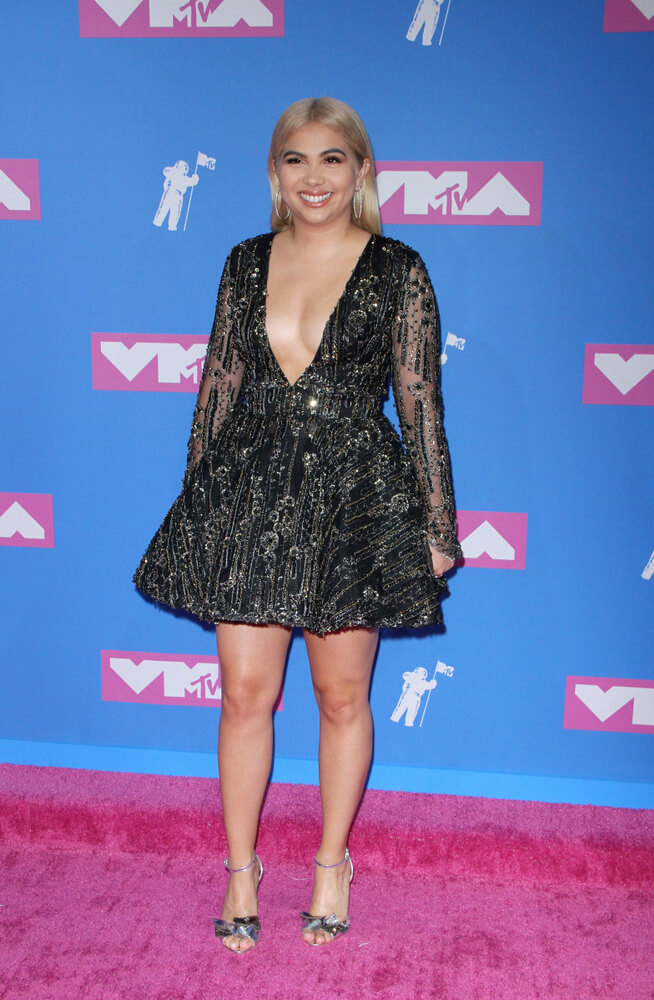 Winner of the Push Artist of the Year award, Hayley Kiyoko looked gorgeous at the 2018 VMAs, with a dress that was perfectly suited to the event.

What did she wear?

A black sequinned babydoll cocktail dress from Stello. The dress featured long, opaque sleeves along with a plunging neckline, giving the outfit quite a bit of drama.

How did Kiyoko style the dress?

She opted for an embellished clutch from Judith Leiber, along with a glamorous pair of heels from Sophia Webster. Kiyoko kept her hair quite simple, leaving it down with a center part, enabling the dress to really speak for itself.

Want to buy the dress that Hayley Wore?

It is known as the Alice dress, and can be found in the brand’s Keystone collection.

Millie Bobby Brown always manages to look stunning on the red carpet, and the 2018 VMAs was no exception.

Brown showed up in a black, tailored, straight-legged jumpsuit. There was an asymmetrical cut-out just below Brown’s chest, making her outfit look less harsh thanks to the pop of skin that showed through.

The square neckline kept the outfit grounded, and while many might have said that the jumpsuit was far too simple to be worn to an event such as this, it was the sleeves that helped to take this outfit to the next level.

Accompanying each spaghetti strap on Brown’s shoulder was an oversized chiffon bow, tied in a way that enabled it to drape loosely down over each side. This gave the outfit plenty of attitude and drama, taking it from an everyday look to a special occasion one.

Brown decided to go simple with her jewelry on the night, with her only item being a single banded ring.

However, the shoes that Brown wore helped her outfit to make the statement that it did…

Her hair was relatively simple, kept down with a deep side part that accentuated Brown’s facial features.

When some fashion inspiration is needed, red carpet events will never fail to provide some. While many of the outfits seen at the 2018 VMAs were ones that should definitely not be repeated, there were so many celebrities that managed to pull off extraordinary looks, showcasing their figures, their personality and the latest trends all at the same time.