The People’s Choice Awards is all about celebrating the best of popular culture, and includes so much more than just television and movies.

One of the most coveted awards of the night was for Beauty Influencer of 2018, for which there were five deserving nominees.

Each of these five YouTube personalities have definitely made waves this year in the beauty industry, and look set to continue to do so as we prepare for the new year.

At just 19 years of age, James Charles has already made quite the name for himself in the beauty industry, making it no surprise that he won the award for Beauty Influencer of 2018. 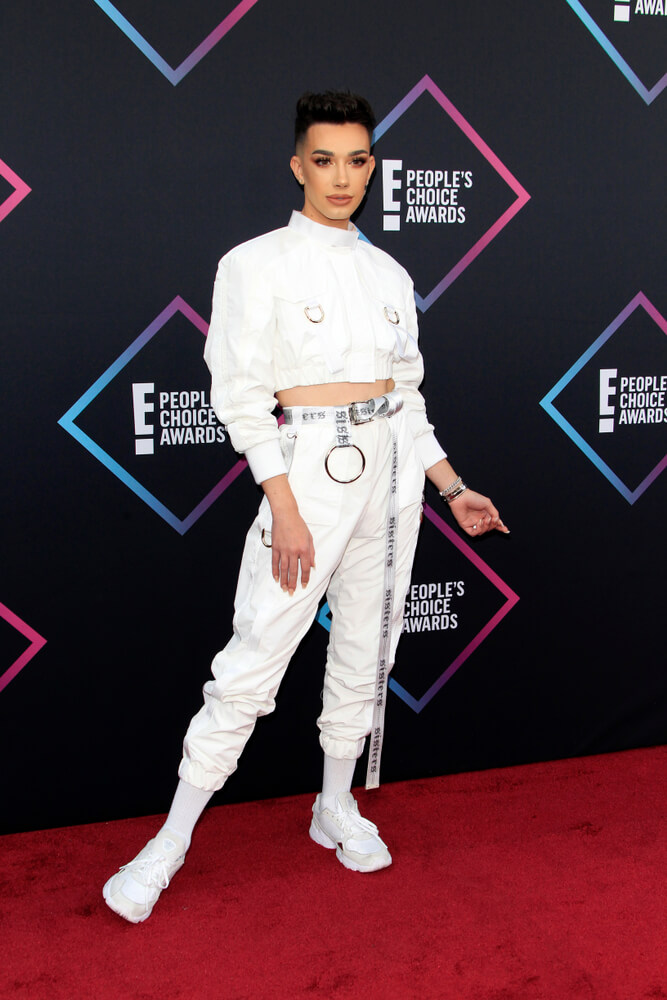 With more than ten million social media subscribers, it is likely that you have heard of this influencer before, but for those who haven’t, here is everything you need to know about James Charles…

Charles first launched his YouTube channel in 2015, with a strong focus on makeup. He quickly became a huge hit, with his channel being one of the fastest-growing on YouTube.

Just a year later, Charles was scouted by CoverGirl and became their very first male spokesperson.

What made Charles’ videos stand out from other beauty bloggers?

Well, right from the start, Charles has been determined to veer away from the conventional tutorial-style videos that many beauty bloggers produce. Instead, he tries to make his videos as entertaining as possible, experimenting with avant garde looks that are far from mainstream.

The YouTuber has joined forces with Morphe, a makeup brand that is known for teaming up with beauty bloggers.

What have they created in their collaboration?

Charles is all about encouraging others to get creative when it comes to makeup and beauty, and the products he has created stand behind that ethos.

A beauty vlogger from the Netherlands, NikkieTutorials does have a real name – Nikkie de Jager.

De Jager first began creating YouTube videos in 2008, focusing on creative beauty tutorials. She did this for about two years before making the decision to study makeup, and then moved on to becoming a professional makeup artist.

In 2015, one of de Jager’s videos went viral, shooting her to fame.

Which video was it?

The Power of Makeup, in which she wanted to tackle the increasing problem of makeup shaming.

What is makeup shaming?

It’s nothing new, it’s happened for years. It is when a woman is criticized or shamed for wearing makeup in a certain way, whether this may be the style of makeup she has chosen or the amount of makeup she is wearing. This is something that de Jager wants to put a stop to, believing that women should be able to have fun with their makeup without having to worry about what others may think of them.

In the Power of Makeup video, de Jager created a gorgeous makeup look, but only on one half of her face. The contrast between the made up side of her face and the makeup-free side was one that people weren’t used to seeing, and this led to so many others producing their own similar videos and photographs.

In 2017, de Jager was shortlisted by Forbes as one of the top ten beauty influencers of the year, and she also won a Shorty Award and a Teen Choice Award.

Wondering if NikkieTutorials has any beauty products out there?

Yes, with a few different brands!

One of her most popular collaborations was with Too Faced, with products including:

Also included in the eyeshadow palette mentioned above is some loose glitter, and this is an element of the product that de Jager is especially excited about.

Because glitter is something that this YouTube star loves, and always makes sure that glitter is incorporated somewhere into her makeup look.

Think glitter can only be worn on special occasions?

De Jager would beg to differ, swearing by the way in which it can transform every single look.

Brooklyn and Bailey are identical twin sisters who were both nominated for the Beauty Influencer award. 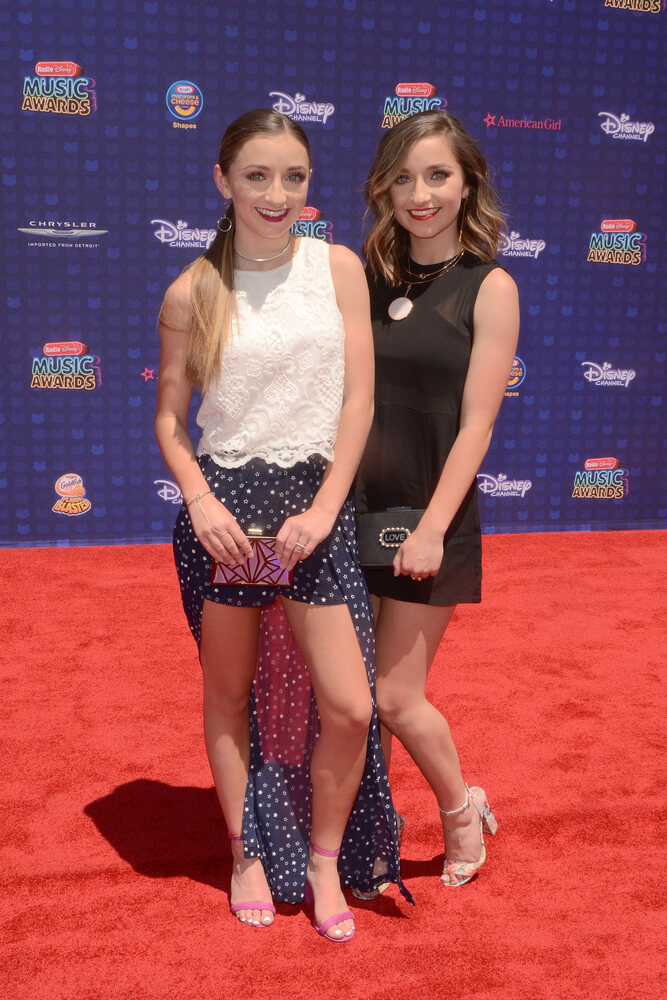 The girls first appeared on YouTube at just nine years of age, when they were models for their mother’s hair blog. This was way back in the day, before channels even existed on YouTube.

However, once channels made an appearance, the twins started their own, at the young age of just 13. While they may have been young, they took this new challenge seriously, sitting down with their parents to discuss their brand and content ideas, ensuring that everyone was on the same page.

Their videos were a hit, and in 2015, Business Insider listed Brooklyn and Bailey as 13 up-and-coming YouTube stars you should be following.

What have the girls done in the three years since then?

Quite a bit, such as:

What does all of that have to do with beauty?

Well, beauty, along with fashion and other “fun things”, is exactly what the Brooklyn and Bailey YouTube videos are all about.

In fact, earlier this year, the twins launched their very first cosmetic product, after two years of working on it.

A mascara called Lash Next Door. Mascara was an easy choice for the girls when deciding which type of product to develop, since they have always received compliments for their eyes.

In order to stay true to their brand, the girls wanted to create a mascara that they would wear and be proud of, with Lash Next Door boasting the following unique features:

Brooklyn and Bailey are hoping to one day have a full beauty line, so keep your eyes peeled!

Born in 1987, Jackie Aina was another nominee for the Beauty Influencer award. This YouTube star has over 10 million followers on social media, and prides herself on being quite the activist too.

What is she an activist for?

Aina focuses on advocating for the inclusion of African-Americans in the beauty industry.

She started her YouTube channel in 2008, when she was stationed by the military in Hawaii. Aina always loved beauty, but was repeatedly being told by cosmetic counters that the looks she was going for wouldn’t suit her skin tone.

She took to YouTube to showcase her creative style and ideas in beauty and makeup. By taking inspiration from the looks created by other beauty bloggers, but showing her viewers how to make these same looks work on darker skin, Aina quickly became a major success.

Many now consider Aina to be an authority when it comes to diversity in beauty, and the industry itself has also been changing thanks to influencers like her.

How have Aina’s videos changed over the years?

Well, at the beginning, they tended to be much more serious, with a strong tutorial vibe going on. However, as Aina has developed, she learned that it was absolutely fine to allow her own fun and quirky personality to shine through in her videos, and this has definitely helped them to stand out.

One of these is Two Faced, who came to Aina for help in expanding one of their foundation ranges, so that they could make it more suitable to women of color. The new and improved Born This Way foundation line was released at the start of the year. The collection features 35 hues in total, 11 of them being new and 9 of them being developed with the help of Aina.

The problem that Aina had with many of the darker colored foundations already existing on shelves was that they tended to have quite a red undertone, which wasn’t flattering on darker skin tones. Aina has helped Too Faced to overcome this, with the shades she worked on featuring a variety of undertones, including shades that will work for olive and golden-based skin tones.

Aina has also collaborated with e.l.f., creating an eyeshadow palette that quickly sold out. With five shades ranging from a deep jewel teal to a metallic gold, and an affordable price tag, it’s not surprising that the brand couldn’t keep this palette on the shelves.

What are Aina’s plans for the future?

Aina is working on developing her own cosmetics line, which she hopes to be able to launch next year. 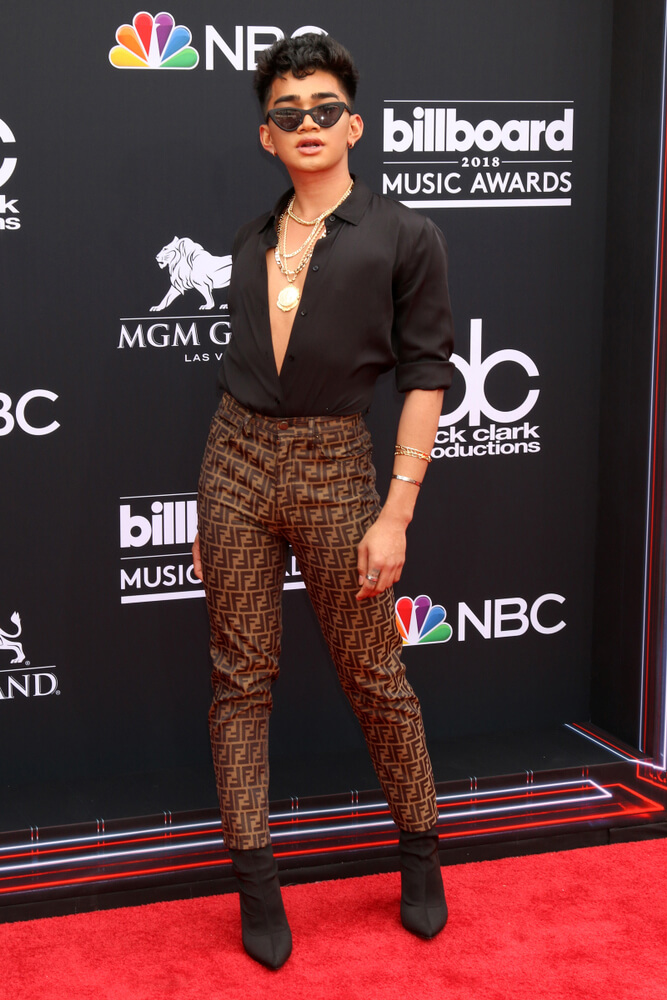 How did he get started?

It all began when Rock was in eighth grade, when he first started his YouTube channel. By the time he reached the age of 17, Rock had already made quite the name for himself. In fact, one of his beauty videos went so viral that Instagram had to temporarily shut down his account, leading to a hashtag calling for the social media platform to reinstate him.

It wasn’t long before Rock was back online on Instagram, showcasing his beauty looks to the world.

For Rock, beauty is all about self-expression, and this is something that he tries to encourage as much as possible through his videos. Part of his popularity is down to the fact that Rock constantly celebrates individuality, not only his own but also everyone else’s. His confidence when it comes to fighting for LGBTQ rights has also inspired so many all over the world.

Rock took his career a step further this year when, just like James Charles, Rock entered into a collaboration with makeup brand Morphe, releasing a highlighter palette. In order to be inclusive to everyone, the palette featured shades that could be used by every skin tone and type, with the shades themselves being inspired by different aspects of nature.

The palette features six different shades, along with a fan brush, with the shades being creamy and buildable, enabling people to really customize their finish. From Gilded Gold to Pearlescent Pink to Iced Champagne, it is easy to see why this palette quickly sold out.

With all of this experience behind him, it isn’t surprising that Rock was nominated for the Beauty Influencer award at the 2018 People’s Choice Awards. While he may not have come away with the prize, Rock still received plenty of praise and recognition, taking his fame to even higher levels.

All of the Beauty Influencer nominees were present at the 2018 People’s Choice Awards, and looked absolutely fabulous on the red carpet. Although James Charles is quite a newcomer to the industry, he was still well-deserving of the award, which all of the other nominees readily agreed with. Nevertheless, no matter who took the award home, there is no denying that this group of influencers has really made a splash in the beauty industry, and will likely continue to do so for years to come.